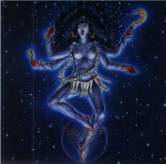 In contemplation I had a vision of divine Kali, devourer of worlds and creatrix, lover and mother goddess to creation.  While I had an intellectual understanding of the goddess in each of her dual roles, in ecstatic vision I apprehended  goddess in the seemingly paradoxical roles simultaneously.

Such an experience impresses one as to the power of myth, and of contemplation.  Silencing the tumultuous ego, the container separating us locally in space-time, allows us access to the realm of myth, the non-local realm of the archetypes in the hyperspace of mind.  Thus I was able to grasp what, from a perspective in space-time, would be two contradictory notions:  destroyer and creator.

Myth explains to us what does not make sense in the limited material world.  It is a bridge to the infinite, reminding us that the daily reality we experience is only Maya, or illusion.  Myths serve to unravel the complex nature of a creation of which we experience only a part.  This connecting the part back to the whole is the true meaning of religion, to connect back.  So let us look at the role of Kali in religion.

Kali is the feminine aspect of Shiva.  Or, one could say Shiva is the male aspect of Kali. It is a beautiful notion, really.  Male/female separation is an artifact of the separation in space-time, so the transcendent Divinity is both male an female.  The duality of the Maya creation is the measuring of Yin and Yang, separation and combination.  Separation in the world, or union in spirit.  Either can be male or female.

The male as divinity sees male spirit giving life to the feminine world of matter.  The sensible world is the female body to the male spirit. Creation springs forth from the seed of the cosmic Shiva lingum, the world of matter trapping the eternal spirit in the cycles of life and death in time.

The Divine infinite as female is the infinite out of which sensible worlds are separated by the male principal.  The cosmic Yoni is the gateway to the void outside of time, before creation.  The dying male is a transient birth and death against the backdrop of the eternal feminine.  The longing for sex is the longing for reunion with the deity in the timeless void.

As I sat in contemplation of the paradox of reality, Kali came to me.    I was in awe as the Technicolor vision unfolded: It was Black Kali, devourer of worlds.  She sat in the lotus, floating suspended in the void, arms dancing, her tongue extended in Samadhi. With an electric pop her tongue would snap up an entire universe.  I could see them collecting inside of her like children in the womb.

I understood later the waving arms:  dancing the dance of creation, weaving the sensible worlds into existence.  The vision contained thus both creator and destroyer:  Maybe it was in response to my failure to grasp this that Kali granted me the divine ecstacy, revealing the nature of union in the Divine at the edge of creation.